image goes here
Staunton, "the place of the stones", was the ancient name given by the Anglo-Saxons. The village has stones of ancient origins and of mysterious forms, these are the Buck, Toad, Broad, Long and Queen Stone, all of which have origins dating back to the Bronze and Iron Ages. The Buckstone lies in Highmeadow Woods near the village. The huge rock on the summit of Buckstone Hill is said to have been used in Druid ceremonies, and actually used to rock before it was dislodged in 1885. This point is at 915 feet and one can view panoramic scenery such as views over the Forest of dean, Highmeadow Woods and the Black Mountains. The woods around Staunton are not actually part of the Royal Forest but are part of the Manor of Staunton.

In the churchyard of All Saints Church, you will see the grave of David Mushet (1772-1847). With his son, he developed interest in the iron industry of Dean and laid much of the groundwork for the impending steel industry in Britain. For more information, please call us on the number shown, or click in the header of any page to email Staunton-forest-of-dean@villagewebsmith.co.uk.

With half the traffic on the Internet now being delivered to mobile devices, the search engines are placing increasing importance on making websites mobile friendly.

I am getting increasing numbers of emails like the one shown to highlight the fact that some sites are in danger of being ranked lower than they would normally be, because there are issues for mobile users with the full page layout.

Automatically presenting a different layout to devices with small screens is now an integral part of Webinthebox®, but if your site has been established for a while, it needs a small update to bring it in line with current practice.

Take a look at your site. How long is it since it had a facelift? A simple, inexpensive update now can make sure that all the hard work that has gone into your website's search engine performance will continue to reap rewards in terms of site traffic.

Call us now or click in the header of any page to send an email and get the ball rolling. 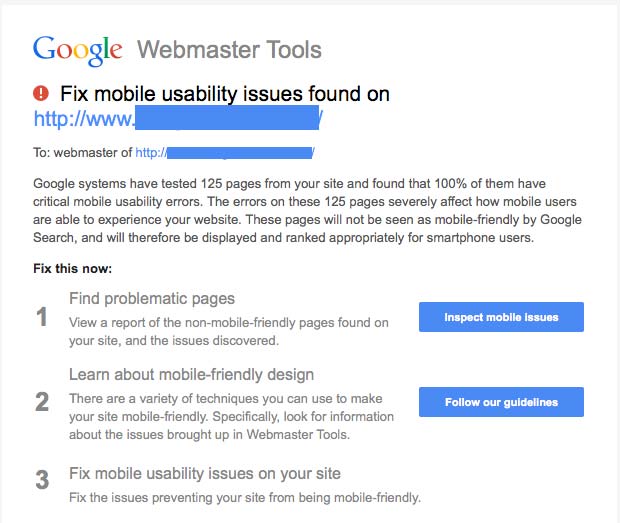